I called Daddy to discuss a few details of my upcoming party but to no avail. It goes without saying that Judith (mummy) is more the person to consult when it comes to parties but this is meant to promote both my newly expanded life coaching business, and to incorporate my love for the planet.

I’m not mocking those who push to ‘do what you love’… but taken literally… my job would be reviewing posh resorts and spas. Practically speaking though, the planet does matter to me, and I’ve taken up the Great Reset Agenda in tandem with furthering my work. Some of which was Daddy’s idea… unfortunately Judith answered.

‘Yes, I’m still in the Bahamas… yes, all going swimmingly… (OMG!) YES I’m wearing sunscreen… is Daddy there?’ (as if I’m twelve). ‘Yes, I’m working, loads of clients on the horizon… is Daddy… no not technically on the horizon, some are actual clients, I just need to ask him some questions about a party… a BUSINESS party.’ 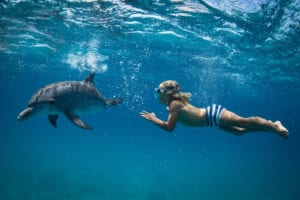 Then she went on about invitations, and how themes generally fall flat before eventually telling me that Daddy was out.

‘Out? How can he be out? You’re in the country.' I insisted.

‘I think he’s gone duck hunting,' she said, in an uncharacteristically high voice.

‘In spring?? Unlikely. This wasn’t going well. I checked my watch for no reason and asked, ‘Can you just have him… NO, MOTHER I’m fine… I just…’ Oh my double god! ‘Can you please just… thank you. Goodbye.’

Truth was, it had been Daddy’s suggestion that I do some real promotion while I’m here amongst the leisure working class, and that I get a jump on the Great Reset folks, why wait for the WEF to dictate a timeline. He’s suggested instead of just posting videos and admonishing like they do… that I really implement. So I’m doing cocktails for a hundred and serving the most sustainable options: Cocktails that come packaged in barrel pouches, paper straws, eco-friendly everything, cheeses from farms that convert buffalo waste into clean energy, and of course bugs—the greenest of all proteins.

I just wanted to ask if he really was in favour of serving bugs… I certainly didn’t see anyone serving them in Davos and the idea made me shiver but I thought… maybe he’s right and I needed to really dig in, but every choice created a dilemma. 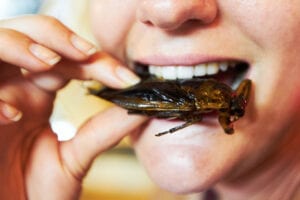 For instance the cocktails in recyclable barrel pouches… forget that they would have to be shipped here especially, but unless I made a big deal about it, I mean really point it out… who would know? I run the risk of virtue signaling, which is the exact opposite of what I’m trying to do.

It was a dilemma until I realised this crowd wasn’t going to want anything other than known commodities anyway (Veuve, Monkey 47, French reds…) If I were going to introduce the eco packaging, I’d have to just send everyone home with a sample of the pouch cocktails, which again they’ll likely never drink so… hmm.

I called the third sustainable cheese farm on my list and was told, "People don't think a lot about poop when they think about sustainable cheesemaking, but they really should.” And I knew I’d reached the right place. But best keep that slogan off a cocktail napkin though.

I was going to need backup, so I flew in an assistant I’d used in the past. Straws, too, were creating a huge dilemma as everyone knows the paper ones just don’t work. I’d personally had good luck with pasta straws but they weren’t gluten-free.

Meanwhile my assistant had been making a mood board on whose authority I didn’t quite grasp, but which she says is ‘essential to really nail down the concept’. Ugh! She had researched “everything from movies, to fashion, to art”, and after half a day spent, it looked like a party in which I was marrying myself.

‘GREAT RESET!’ I yelled at the top of my lungs before realising I sounded like I needed a Xanax.

But Xanax I did need when I found out that the much-touted bug supplier…for all their preening and wailing, actually didn’t have any bugs at all! None I could serve anyway. Their “current line” catered only to agricultural needs (fertiliser) and pets. PETS?? Now I really wished I’d saved my scream.

How dared they go on chastising the rest of us, bragging about a higher protein source and more sustainable and no greenhouse gases and getting the rubber stamp of the WEF! Little creatures, big change my ass! I was livid. Twenty years ago Harrods had sold chocolate-covered ants which were considered a novelty but it actually existed. I wanted this bug supplier kicked out of the World Economic Forum and beaten with sticks. 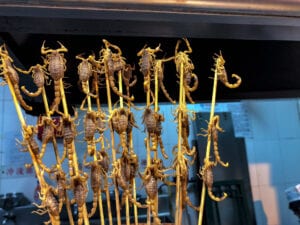 Just then Daddy rang and I had all I could do to not start crying. He listened and then said, ‘So if I understand the problem… your eco-food isn’t fit for human consumption… do I have it right?’

I was too pathetic for words. He had it right, which momentarily made me laugh, and then I did start sobbing. He just let me go on and on while he googled and found a solution.

‘It’s going to sting a little…’ He began… ‘but if you agree to overnight delivery there’s a company out of Thailand that sells cooked and dehydrated bugs—seasoned with salt! It says right here, edible grasshoppers, crickets, silk worms and sago worms’.

I was silent. ‘I thought for sure I had you with sago worms.’ He added, trying to cheer me up. Just then the idea that I truly was serving bugs hit me and I started to vomit. I thanked him and rang off.

After sorting myself out, I returned to find my assistant on the phone chatting up a DJ. Maybe. It was hard to tell with all the ‘totally’ and ‘kif-kif’ going on. It was then that I decided SHE ALONE could be on bug detail and I explained to her just how important this particular component was, and that she should create an ICP (ideal customer profile). Listen, I had just learned the term myself but I needed her to take this seriously.

It was party time and while I thought it would be the men clamouring to crunch down on one of these edibles, it was the women, who somehow conflated high protein with lean, and saw these critters as the fast-track to a flat stomach. I had to keep drinking because every time I thought about crispy cricket legs breaking away from a body and being pressed back by someone’s tongue I started to hurl. I couldn’t even face my guests. Had I seen any food stuck in anyone’s teeth I’d have lost it.

It was indeed too soon to leave my own party, but a hangover couldn’t come soon enough.