Like many other nations, Canada is experiencing the devastation wrought by purblind and incompetent stewardship unable or unwilling to calibrate the costs of a therapeutic lockdown as measured against a noxious shutdown of the nation’s business. Canadian prime minister Justin Trudeau, a member of the leftist Desposyni, provides a striking example. His record leaves little doubt that he is now steering the country over the economic precipice—and we must remember that the Canadian economy, like an ailing patient, already suffers from “pre-existing conditions.” Our Parliamentary Budget Officer forecasts that real GDP will contract by a whopping 12 percent.  The deficit (N.B. not the debt, which is approaching $800 billion and may reach $1 trillion this fiscal year), currently at $20 billion, is projected to rise by the end of the year to an astronomical $250 billion and counting.

Undaunted, Trudeau has just announced he is earmarking another $850 million for the ethically compromised, pro-China Wolrd Health Organization, which President Trump has rightly called a “pipe organ for China." Such largesse is an unwarranted extravagance that a reputable leader would do everything in his power to resist. Nor would a reputable leader use COVID-19 as an excuse to introduce a bill giving the Liberals unilateral new powers to spend, borrow and tax without parliamentary approval. The bill was narrowly defeated but Trudeau’s Liberals plan to draft changes to the legislation which, according to the parliamentary budget officer, would give Trudeau “unprecedented” powers. This is the boy-emperor’s moment in the sun.

Meanwhile, the Canada Emergency Response Benefit (CERB), now issuing cheques of $2000/month to persons whose income has fallen under $1000 a month, has already paid out more than $25.6 billion, soon to rise as high as $35.5 billion. Officials are bracing for four million applicants. It has recently been announced that the benefit will be extended, as I had predicted it would—a measure that the country simply cannot afford. The Canadian federal government is not an ATM machine. In the long run, CERB is de-incentivizing and may lead to a condition resembling what psychologists call learned helplessness, defined as “a mental state where someone who is forced to bear repeated adverse situations, becomes unable or unwilling to avoid these situations.” The answer does not lie in CERB, but, given reasonable safety provisions understood and practiced by presumably mature people, in allowing the country to get back to work.

The temptation for too many Canadians, of course, is to stay at home, benefitting from taxpayer-subsidized wages and so deeply animated by dread that they have formed a Hobbesian pactum with political authority, clustering around the skirts of government and a compliant, all-over-the-place medical consortium floating googolplex mortality rates. Subdued by disinformation and grateful to our presumptive benefactors, Canadians have become a nation of barmy potbangers, emerging briefly on their door stoops every evening to cheer, blow horns and rattle pots and pans in an ostinato of celebration for our brave and exhausted healthcare workers, then return like snails to the ostensible safety of their shells. The irony is, as the latest stats reveal, that our nurses are, if anything, underworked. In Ontario, for example, “medical personnel are being sent home early from quiet hospitals.” Here in British Columbia, with a population of over five million, we have as of May 12 (the time of writing) merely 63 COVID-diagnosed in hospital, 16 in ICU—that is, .0000123… of the census—and empty beds by the thousands.

Such facts, while readily available with a modicum of research, are generally suppressed by the mainstream media, rendering the public susceptible to panic and manipulation. People are then easily influenced into acquiescing, as Jack Kerwick writes, to “a sort of internment that has been imposed by their governments upon them in the name of keeping them safe from getting sick”—the kind of “internment” envisioned and practiced by top-down, collectivist regimes. This seems to be an effective totalitarian remedy for freedom and a political windfall for aspiring despots. 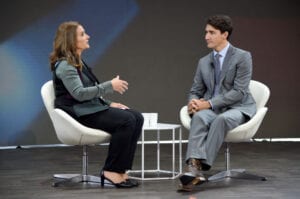 Action4Canada points out that since taking office, “Trudeau has demonstrated an agenda in support of communist dictators…and has referred to Canada as the first ‘post nation state.’” He is demonstrably pro-Chinese. He is also in close contact with UN globalists and international firms and power brokers who profit from the pandemic. His intimacy with the Bill & Melinda Gates Foundation, a globalist concern which lobbies for open borders and anti-national one-world solidarity, and is one of the single largest donors to the tainted WHO, is well-known. The question poses itself. Has Trudeau taken a page out of Barack Obama’s playbook for the radical “transformation” of the nation into a quasi-Soviet, one-party dictatorship with a U.N. Agenda 21 complexion? The question sounds like the expression of a conspiracy theory, but is not as far-fetched as it might initially appear.

We are governed by an apostolic socialist whose mandate is to spend money he does not have, stifle the market economy to the point of asphyxiation, and establish alliances with dodgy syndicates and suspicious characters to further his doctrinal interests. He can be expected to plead COVID-19 for bankrupting the nation. Fancying himself an international player in the viral sweepstakes, he is not likely to experience a light on the road to Damascus and reverse course: end the lockdown, exercise stringent control of the public purse, cease the prohibitory flirtation with socialism, and stimulate rather than deep-six Canada’s essential industries, in particular the production of oil and oil-based derivatives (plastics, fertilizers, heating oil, jet fuel, feedstocks, waxes, lubricating oils, asphalt, etc.) and the building of pipelines, since the global oil market will definitely rebound.

Admittedly, Trudeau has pledged assistance to the oil sector, but given the pressure being brought to bear by Big Green and his own inclinations, as Michael Walsh indicates here at The Pipeline, we may be forgiven for being skeptical. In any event, failing such corrections, I can see no way in which the country can avoid economic and social collapse. Printed money is not real wealth. Too much printed money is real poverty.

Meanwhile, Trudeau has assured Canadians that the economy will come roaring back—which it surely will, with the last phlegmatic roar of a sick lion. Canada has already ceased to exist as a viable and unified country, only preserving the sentimental and cartographical semblance of one. Abetted by a flaccid and complacent public of potbangers, Trudeau will likely finish the job.