Some years ago when I was a media company executive, I had to spend long fruitless hours in a committee that had been given the task of writing a company mission statement. My opening suggestion that we should write “We give our customers accurate news and fair-minded commentary, the fastest, the mostest” and leave it at that was quickly sidelined as frivolous. It made no mention of stakeholders, equal opportunity, corporate giving, social responsibility to our city and region, and much else thought to be vital by the accounting department, the strategic planning department, and the religious affairs correspondent. Discussion limped on for many days over the minutiae of trivial differences until eventually the actual journalists present gave in and assented to a smoothly unmemorable paragraph. Today I can’t recall a word of it.

My skepticism about that sort of thing was confirmed when I came across the monograph Good Companies Don’t Have Mission Statements by Digby Anderson—a sociologist, a wit, a gourmet chef, and an Anglican clergyman—published in London by the Social Affairs Unit. Dr. Anderson’s broad argument is that companies can be classified into two groups: those that know what they do, and those that have mission statements. Because those in the second category don’t know what they do (or in the case of pornographers, slum landlords, etc., would prefer not to say), their mission statements tend to the vacuous, the long-winded, the boastful, and the excessively worthy. Dr. Anderson cites many self-promoting examples, but maybe the ripest is the mission statement of BP Amoco which declared holily that we “try to be a force for good in all that we do.” Almost as if the company was God, as the Anglican clergyman noted acidly.

Running into that quote was a genuinely pleasurable surprise, however, because I had earlier decided that my topic for this article would be BP’s latest mission statement.  To be fair to BP (formerly known as British Petroleum, among other things) and its CEO Bernard Looney who signs it, the document is technically not a mission statement but a declaration of how BP intends to lead the world into the broad sunlit uplands of a net-zero carbon emissions future. But that ambition suggests a company that doesn’t know what it does, or more charitably a company that doesn’t want to be a major oil and gas producer and is looking for some other identity.  Maybe you think I’m exaggerating? Here’s its opening line:

BP today set a new ambition to become a net zero company by 2050 or sooner, and to help the world get to net zero.

It then sets out two set of aims. The first five show how BP itself intends to become net-zero. They are:

All these points are hard to reconcile with being an oil and gas producer. But with point five, BP comes out of the closet as a Green refugee from its core business.

Turn now to the second set of five aims—those attempting the even bolder ambition of making the world net-zero. These are:

*[The Task Force on Climate-related Financial Disclosures, which "will consider the physical, liability and transition risks associated with climate change and what constitutes effective financial disclosures across industries"].

And thus with these five aims, BP becomes an evangelical missionary preaching against its core business. For if BP persuades the rest of the world to stop buying oil and gas, how is it going to make money? Renewables? Not many companies marketing wind, wave, and solar solutions can boast BP’s earning power. Most of them need state subsidies to survive. What will the shareholders make of this strategy?

Oh, yes, the shareholders. In order to get to them, the reader has to trudge through some substantial paragraphs on plans for the corporate re-organization that will deliver this transformation of BP into a Green energy NGO. Beyond those paragraphs, he will find the following:

I’m not sure that if I were a shareholder, I would find these plans very comforting. My feeling would probably be that BP’s senior management, in order to appease pressure from governments, UN and other international agencies, the environmentalist movement, including deep green extremists such as Greta Thunberg and Extinction Rebellion, and advocates of “woke capitalism,” have decided to take a giant financial leap into the dark by adopting government policies that have a fair prospect of losing my money. I might look at BP not as a capitalist corporation trying to make a profit but as a socialist one trying to achieve certain political objectives—sometimes objectives that public opinion dislikes, such as carbon taxation, and that governments themselves are nervous about pursuing.

As it happens, there’s a lot of that kind of corporate transformation going on. It’s almost a trend. So it’s worth wondering how might we legitimize the gradual transformation of the corporation from a capitalist to a socialist entity?

The answer is surprisingly simple. It needs only one very straightforward reform. It’s a reform rooted in the orthodox capitalist theory of the limited liability company. And to add the spoonful of sugar that makes the medicine go down, the reformer can dress up his proposals in the soothing but deceptive managerial jargon of “stakeholder capitalism” (though managers should be warned that this reform will make their jargon honest.)

The reform begins with a question: why should shareholders get their dividends? It’s an old question. Socialists have traditionally asked it, especially when the dividends were large, because they felt that a company’s profits should be distributed more equally between shareholders, management, and workers. The answer to it is that shareholders get what’s left -- “the residual” -- after the other stakeholders have already got their shares. Indeed, the shares going to the other stakeholders are guaranteed in advance—to workers in wages, and to managers in salaries, stock options and other perks. A profitable company can keep all its stakeholders happy, but an under-performing company will pay few or no dividends, and a bankrupt company will mean not only that shareholders get no dividend income but also that they lose their entire capital, their savings, as well. Dividends have been their reward for taking that risk.

If that’s the traditional company structure, it’s not the only one. We can in principle organize companies on very different foundations. Different versions of worker control and participation have been attempted across the world since 1945. Some survive, but none have been game-changers, and mostly their results have been disappointing. The main alternative to capitalism under fire usually comes down to socialism of some kind.

Old-style socialists want companies to be founded, funded, and managed by state managers on lines approved by government. That system has a tendency to produce failing companies that consume state subsidies and press governments to protect them against competition (often successfully because that saves ministerial faces too.) Or as the sadder-but-wiser saying goes: “If the government owns an airline, it’s really the airline that owns the government.”

That kind of socialism has gone out of fashion even on the Left which now prefers to regulate capitalist companies so that they aim at more “socially responsible goals” than mere profit-making while still not actually going bankrupt. Ministers then get the credit for the company’s virtuous behavior, and the capitalists pay the price in reduced dividends for the “social obligations” imposed on them. That’s the socialist view of what a corporation is and how it should operate, but it’s also one that has been swallowed by corporate and capitalist titans. As the manifesto of the 2020 Davos World Forum puts it:

A company is more than an economic unit generating wealth. It fulfills human and societal aspirations as part of the broader social system. Performance must be measured not only on return to shareholders, but also on how it achieves its environmental, social and governance objectives. 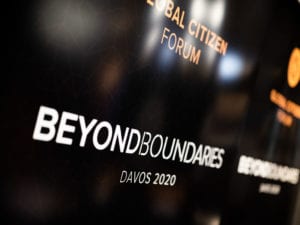 If we look at the “re-imagining” of BP by Mr. Looney and his corporate colleagues, in which he makes the “net zero” goals of government a central purpose of BP, we can see that it fits very neatly into this paradigm.

What makes it an unusually difficult proposition in BP’s case, however, is the radical character of the “net zero” obligations that BP has to accept as part of its re-imagining. In brief, these are seeking to reduce the market for its core products drastically, embarking on new energy industries in which it has modest expertise and which themselves will struggle to survive (let alone prosper), endorsing the replacement of the market by national and international socialist planning, and supporting general economic policies that will raise energy prices for everyone and severely impoverish Western populations -- one well-researched estimate puts the total cost of getting to net-zero carbon admissions at one-and-a-half trillion Pounds. In these circumstances, as Rupert Darwall points out in his forthcoming “The Climate Noose: Business, Net Zero and the IPCC's Anti-Capitalism,” published by the Global Warming Policy Foundation, corporate executives like those at BP would be collecting their shareholders’ money and distributing it on causes which they might dislike and which would certainly run counter to their interests in very large amounts.

As I hinted above, however, there is a simple way to legitimate this. If the senior executives of BP and other corporations with a passion for corporate social responsibility were to borrow money from banks or other institutions and buy out the shareholders, thus becoming manager-owners, they would then take on all the risks of ownership. They would have to pay interest to the banks, as with wages to their workers, out of company profits before being able to distribute “the residual” to themselves in dividends. In hard times they might have to cut or even eliminate their salaries to ensure the company’s survival. If the prospered, however, they would have a clear right to disburse company profits either in donations to favored charities or in financing “their environmental, social, and governance objectives” because they would be spending their own money in doing so. Governments might even consider making corporate social responsibility spending conditional upon this form of company structure. (They’re as about as likely to do so as manager-owners would be to maintain high levels of corporate social spending.)

All the same, I recommend this reform to Mr. Looney and his BP colleagues. I also recommend it with greater hope of agreement to their shareholders.