First is the lack of any sincere effort at pretense that this was much more than dishonest re-branding failed left-liberal big government proposals, of which 87,000 new IRS employees is the most eye-popping. New York Times columnist economist Paul Krugman rakishly opened this column with the confessory, “[t]he Inflation Reduction Act, which is mainly a climate change bill with a side helping of health reform…”

Ah, yes. The long-stalled “climate” legislation. No support for something? Just call it whatever the public do support. Expect annual Free Beer and Apple Pie Acts. It’s not like there’s a crisis of confidence in institutions. Just lie, baby! Fighting inflation, one dishonest abandonment of republican principles at a time. 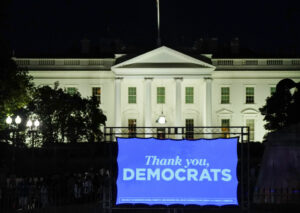 It's a climate act! A tax hike! Health care!

So, no, it isn’t just a tax and spending bill. The “Inflation Reduction Act” — also sold as deficit reduction — will neither lower inflation nor the deficit but, in addition to containing much of Alexandria Ocasio-Cortez’s “Green New Deal” spending, it also holds 40 pages of amendments to the Clean Air Act (CAA).

You may have heard Sen. Ted Cruz saying that the bill overturns the Supreme Court’s recent opinion in West Virginia v. EPA, which finally drove a stake in the Obama climate-change regulations via the CAA. That’s a bit oversold. Which is not to say the provisions are not problematic and possibly very much so.

Consider Sec. 60107 of the reconciliation bill (page 678), which adds a “Sec. 135: Low Emissions Electricity Program.” Very ‘AOC’. And to pull this off, it sails in under the spending flag, $17 million for a few thisses and $17 million for a few thats. But in the back, piloting this cruise, is a section that reads, “$18,000,000 to ensure that reductions in greenhouse gas emissions are achieved through use of the existing authorities of this Act.”

Oh. And which authorities might those be, because… don’t we keep hearing about federal courts throwing out claims that the Clean Air Act is a global warming law? Doesn’t say. Which itself is clever, though hopefully in the end too clever by half. This stunt has two most-likely objectives, first being to dent the armor of folks like Supreme Court justices Roberts and Gorsuch and many litigants and amici in the seemingly never-ending stream of climate litigation saying: look, whenever Congress has specifically considered actually regulating greenhouse gases through the CAA it has rejected the proposal.

In West Virginia, SCOTUS gutted yet another attempt to use one provision this way, while clearing its throat for the next round by placing a “Major Questions Doctrine” front and center: Do not claim that some provision of a given law provides you with the authority for massive economic disruption like greenhouse gas reduction regulations unless you can point to Congress saying that’s what you’re to do.

The purpose of the "Inflation Reduction Act," now heading to Joe Biden's desk for signing, is to arm litigants hostile to the energy industries to claim Congress has said, "oh, just use those authorities we provided over there." See? Purportedly a post-West Virginia v. the EPA affirmation by Congress that, yes, the Clean Air Act provides authority to reduce GHGs, so this (choose your claimed authority) is what they were referring to. Which it isn't. No matter what the Democrats say:

The Senate parliamentarian did strike a companion provision as improperly legislating in a budget bill. That language stood out for having dared to specify certain CAA provisions. The subtler gambit, unfortunately, seems to have gone unnoticed. In fact, it will now buttress defense of those ideas for “backdoor climate plans” using various provisions of the Clean Air Act not heretofore deployed by the climate crowd as possible vehicles to re-engineer the U.S. economy by pretending such measures are consistent with congressional intent. It’s so obvious they didn’t even need to specify what that authority is!

Rather, its purpose is to toss a rhetorical crutch to all manner of activists, whether seated on the bench, in newsrooms, or lurking in pressure groups to decry the trustworthy talking point that Congress has always spit the climate bit and so the latest expansive interpretation of some little-used statutory provision into a global warming roadmap is, supposedly, no longer far-fetched.

Which is to say this is less designed to “overturn” West Virginia, than the implications of that spectacular win, in prepration for the climate complex’s next stab at claiming Congress has already adopted a global warming regulatory regime, while still avoiding any supposed statutory authority. It is pretty aggressively mischievous, subtly eroding a key premise, and recurring theme of the climate opposition, that Congress never authorized any of these programs to be greenhouse gases reduction programs. Which it didn’t.

I for one do not see any of the six justices in the West Virginia majority rolling over for such tricks and saying ah well, that changes things and turns out Congress had settled its debate on the GHG issue. I do however see the D.C Circuit court, which will hear the case first, doing just that.

So, this cynical mischief isn’t, ahem, the end of the world. But it is a very unwelcome development. And an even worse sign of what our republic has come.