Putting aside the fact that the entire “climate change” discussion is based on a long-disproven set of data abandoned even by its author, that it is physically impossible to create the electrical systems and capacity demanded by the Warming hypothesis, and that no uncorrupted global temperature data set supports “climate change,” we are left with the fact that a great many policymakers and voters in the West believe in it.

Policymakers must be expected by voters to get serious, or to acknowledge that the entire argument is, as the U.N. has stated, just a process to destroy capitalism, the most anti-poverty, wealth-creation system ever created.

That "climate change" policies will annihilate the middle class that is responsible for all progress since the Industrial Revolution is a given – and an unacknowledged goal of Progressives. The refusal to acknowledge this by the establishment is childish. If they believe in Marxism, why hide it? Tell the people the goal, why it is a beneficial goal and how to achieve it. Tell them the results of previous attempts at implementing Marxism, as well, of course. 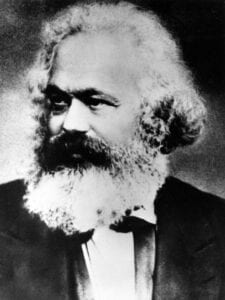 Can a policy framework be created to address function rather than form, what is seen by those who insist the Warming Emperor has clothes, but who disagree on the cut (oil or gas), the color (drilling or fracking) and the pattern (fossil, hydro or nuclear) of those clothes to meet their commitments?

The signatories to the Paris Accords believe emissions must be reduced in order to “save the planet,” and that they will meet the goals to which they agreed. Why, otherwise, would they have signed up? Are the signatories incentivized to make the changes for which they volunteered? Given their dismal performance to-date, the answer is, “No.”

People complain about President Trump having pulled-out of the Paris Accords, but remain silent about the view of the U.N.: “America Is Already Cutting So Much Carbon It Doesn’t Need The Paris Climate Accord.” As shown below, we already are reducing greenhouse gas (GHG) output faster than any signatory country. Being a Paris signatory seems primary, meeting one’s goal, secondary. These priorities are backward. 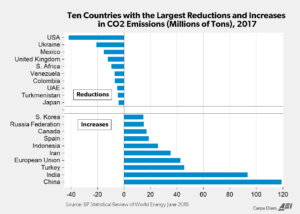 Is the point being a signatory… or reducing greenhouse gases?

In a flight of fancy in which we pretend that, yes, we can correct the global climate that has been set awry by too many American SUVs, why not formulate a policy with teeth to deal with GHG? Can we use positive and negative incentives to alter behavior in the way demanded by those who believe they are more powerful than the sun?

Let us suppose a nation “A” that has met and exceeded its GHG commitment to the Paris Accords, and a nation “B” that has not. What incentives can be used to resolve the discrepancy between commitment and performance?

A suggestion: If nation “A” has met 105% of commitment, and nation “B,” 88%, a metric to create a “Paris Transfer Payment,” or “PTP,” could be created. Nation “B” would pay annually to nation “A” a PTP on its failure of 12%, and another 5% to reward the success of “A,” for a total of 17% of this base metric, thus incentivizing both nations to continue to work toward GHG reduction. (Alternately, the 12% “stick” could be paid to a fund to help the non-industrialized world progress without despoiling the environment, but the 5% “carrot” still paid to the above-goal country.)

A sensible metric could be a percentage of GDP of each country. If we were to use, for example, 0.01% of GDP of the smaller economy as this metric, the PTP could be calculated with complete transparency. In this instance, country “B” (88% of commitment; GDP $500B), would pay a PTP to country “A” (105% of commitment; GDP $1,500B) of 17 times 0.01% of its GDP, or $850M, as a “stick,” and “A” would gain that PTP as a “carrot” for acting in the best interests of the global community of nations. This example is illustrated in Table 1.

Those nations not having set a target for GHG reduction would have the applicable percent calculated by averaging their per-capita GHG output against the goals of nations of similar size. China and India (without which any global GHG reduction is chimerical), would be compared to countries above 200 million population (United States, Indonesia, Pakistan, Brazil), and have their GHG reduction goals set for them, and the PTP applied by the WTO via tariffs.

A nation’s choice of hydro, fracking, nuclear, oil, gas, coal, solar, wind would be theirs. The results are what matters. Form will not reduce the ocean’s rise; function will.

(This same calculation can be used in reverse to warm the planet if, as most uncorrupted temperature data sets now show, the globe is cooling. A “snowball earth” is far more of an existential threat than more food and a slightly-warmer climate.) 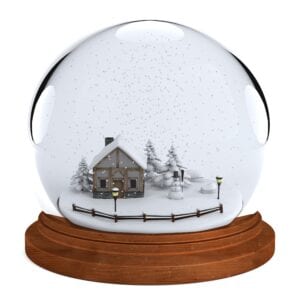 Who turned off the "warming"?

If meeting the Paris commitment is the goal of the signatories, how could this type of transparent, goal-oriented arrangement be rejected? A payment transfer system from those not meeting their commitments to the community of nations, to those who are is a win-win for the future and for countries taking the "climate change" issue seriously.

Remember “Anthropogenic Global Warming”?  “Global warming” became “climate change” because the warming… didn’t exist. It still doesn’t. The global temperature has, since 1997, flattened. This is explained-away by the climate alarmists as a “pause.” The problem? Here’s TIME magazine in 1974:

However widely the weather varies from place to place and time to time, when meteorologists take an average of temperatures around the globe they find that the atmosphere has been growing gradually cooler for the past three decades. The trend shows no indication of reversing. Climatological Cassandras are becoming increasingly apprehensive, for the weather aberrations they are studying may be the harbinger of another ice age.

"Three decades." Or since circa 1944. Added to the 1997 – 2014 “pause,” the global temperature has been cooling or flat for at least 47 of the past 76 years, or more than half the time. And this as post-war prosperity accelerated and hundreds of millions of people increased their use of carbon-based fuels to enter into and prosper from the Industrial Age.

Exactly zero temperature data sets exist supporting warming. None. Never have. Sure – a few data sets exist by once-reputable climate science organizations (NASA, East Anglia / CRU), but those are re-manipulated every few years to show whatever curve is required to support the climate alarmism-of-the-day. This manipulation is of the original data sets, both at the upper end (“The earth has a temperature!”) and at the lower end (“See how fast the temperature is increasing?!”). The original data did not show the temperature increase or steeper slope demanded by the alarmists, so the data were … adjusted. This is called many things, but “science” is not one of them.

Remember the “Hockey Stick” curve that started all this? This “curve” has been the subject of constant controversy since its creation, the foundation of Al Gore’s ridiculous film – and the basis for world governments to waste hundreds of billions (trillions?) of our dollars. The problem? The curve doesn’t exist.

MIT also rejected the 'hockey stick' and the algorithm that created it, noting that random numbers provide a similar curve and fundamental mistakes are present in the underlying math. A large body of “science” supports the AGW argument, though, right?  Don’t 97 percent of scientists support "Climate Change"?

Why, then, do so many researchers and academics support it? Here’s the answer from Dr. Richard Lindzen, the now-retired Alfred P. Sloan Professor of Meteorology at the Massachusetts Institute of Technology:

It was the narrative from the beginning. In 1998, [NASA’s James] Hansen made some vague remarks. Newsweek ran a cover that says all scientists agree. Now they never really tell you what they agree on. It is propaganda.

So all scientists agree it’s probably warmer now than it was at the end of the Little Ice Age. Almost all Scientists agree that if you add CO2 you will have some warming. Maybe very little warming. But it is propaganda to translate that into it is dangerous and we must reduce CO2 etc.

If you can make an ambiguous remark and you have people who will amplify it ‘they said it not me’ and the response of the political system is to increase your funding, what’s not to like?

For the Left, “Science” is spelled “capitali$m,” as most “research” papers supporting “climate change” are written for, or occasioned by, grant money. We have a surfeit of unsupported climate fantasy funded by NGOs, academia and “philanthropic” organizations because academics can be greedy. They see Big Dollars or Big Careers (which equals Big Dollars) in supporting the climate flavor-of-the-month fixation of Big Government or Big Philanthropy. Whatever those organizations are demanding, they supply: the same kind of capitalism the Left is burning down America to protest.

Climate change policies are about one thing: collectivism. The ruling class rejecting the rising individualist middle class of the Western world and billing us for that rejection. It’s about rejecting the voice of people globally, people who, because of the internet and information awareness, now are knowledgeable of how badly and for how long the various Western governments have been and are continuing to screw their citizens.

Every government needs authority and a common purpose in the eyes of those governed. These can be gained via both external and internal threats. Covid-19 masks and unlawful house arrest/lockdowns by some governors and mayors serve to control you. “Climate change” is being used to achieve that common purpose as well. It's all about control.

The data didn’t support anthropogenic global warming, so the name was changed, but the goals are the same: global totalitarian collectivism under our self-anointed betters, the destruction of entire industries, and robbing the West of wealth, progress, liberty and individualism in order to enrich the totalitarian ruling class in the guise of helping the Third World with cleaner air, cleaner water, cleaner parks and playgrounds, and better schools.

When even the globalists at the U.N. admit that the entire climate hoax is not about the climate, but about destroying capitalism, you can be pretty sure that climate change is a feature for the left, not a bug; an excuse to advance totalitarianism and crush the middle class – and to get the middle class to join in, and pay for, its own destruction.

Christiana Figueres, executive secretary of U.N.'s Framework Convention on Climate Change, admitted that the goal of environmental activists is not to save the world from ecological calamity but to destroy capitalism. "This is the first time in the history of mankind that we are setting ourselves the task of intentionally, within a defined period of time, to change the economic development model that has been reigning for at least 150 years, since the Industrial Revolution," she said.

We’ve seen this movie before. In the words of Princeton Professor Emeritus of Physics, William Happer, in 2017,

I don’t see a whole lot of difference between the consensus on climate change and the consensus on witches.  At the witch trials in Salem the judges were educated at Harvard. This was supposedly 100 percent science. The one or two people who said there were no witches were immediately hung. Not much has changed.

At least we aren’t hanging “deniers.” Yet.