Electric cars are having a big moment right now, with the supercilious wonderboy of the Biden administration Pete Buttigieg proclaiming last week that we could escape the pain at the gas pump if more people could “access” electric cars (EVs). Very telling that he chose to say “access” rather than “afford” electric cars, because without the $7,500 tax credit, very few middle-class people can afford to buy an electric car. And very few middle-class people do: the lion’s share of “clean energy” subsidies are captured by high-income households.

But press beyond the typical economic illiteracy of leftists like Buttigieg who think having the government pay billions in subsidies makes something “cheaper,” and note that electrons aren’t printed out of thin air by the Federal Reserve like our fast-depreciating currency. With electricity rates rising fastest in those places that have overemphasized “renewable” energy such as California or Germany, it's not clear that consumers will save much by driving a more expensive electric car and paying higher utility rates. And that’s if you can still fill it up with electrons whenever you want to. During recent power crunches, which are threatening to become endemic in the U.S. under the current policies of the Biden apparatchiks, grid operators have asked EV owners not to charge their vehicles in the evening, when power demand is highest and the time of day when most working people will want to charge their cars. 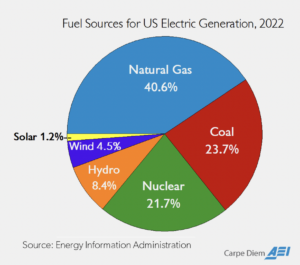 Right now, electric vehicles make up about 1 percent of America’s car fleet. If they pose challenges for the electric grid already, what will the challenges look like if the EV fleet reaches 50 percent of the auto fleet as Biden proposes? No wonder Elon Musk says we’ll need to expand electric power generation by 30 percent or more to meet the demand of a larger EV fleet on the road. And yet it is supremely uncouth to point out that electrons for EV batteries are generated mostly from fossil fuels right now, and thus EVs may not deliver a net reduction in greenhouse gas emissions when a proper life-cycle analysis is done.

Economist Mark Perry notes that nearly two-thirds of current U.S. electricity is generated by coal and natural gas, and the figure rises to 86 percent if you include nuclear power, which environmentalists irrationally hate and are trying to eliminate. When you raise this problem, you are met with a hail of green indignation about how we’re starting on an “incredible transition” to a carbon-free energy future (a phrase Biden and energy secretary Jennifer Granholm have both used repeatedly with the unsettling grin of the chiliastic fanatic). “EVs are just an early step toward the carbon-free nirvana, which is just a few hundred thousand more windmills and square miles of solar power away!”

A recent little-noticed report from Volvo punctures this green myth, even though the very green Volvovians try very hard to obscure this conclusion. The report notes what a number of neutral analysts have pointed out for some time now: EVs are more material-intensive than old-fashioned gasoline-powered cars, requiring more steel, aluminum, copper, and other rare earth minerals and specialty products like magnets that must be mined (which environmentalists oppose) and require an energy-intensive process to manufacture into shiny EVs. And that’s before you get to the huge quantity of lithium needed for the batteries. 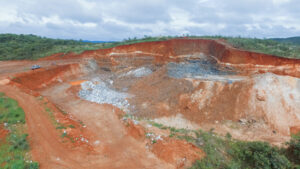 Where "clean energy" comes from: lithium mining in Zimbabwe.

Thus it is eye-popping when Volvo admits that the carbon footprint for the manufacturing of its C40 Recharge electric car is 70 percent higher than its comparable internal combustion version of the car (the XC40). But not to worry, says Volvo: you’ll make up the higher manufacturing emissions when you drive the emission-free EV far enough.

How far? Kudos to Volvo for calculating that: at the world’s average electricity sourcing today, a C40 driver would need to drive his car 68,000 miles to reach a break-even carbon footprint with a gasoline-powered model. The average American drives about 14,000 miles a year, and thus would need to drive his Volvo EV almost five years before reaching a lower carbon footprint. What if we had a grid that was 100 percent wind- or solar-powered? Volvo calculates that an EV driver would still need to drive 30,000 miles before reaching a carbon-footprint breakeven point with a gasoline car.

It is all a ruse anyway. If electric vehicles drop in price and effectiveness, which may be possible with enough brute-force engineering, you can expect environmentalists to turn against them, by noting the huge environmental footprint to make them and the human-rights problems of child labor in Africa mining all the cobalt EVs need. They did it before with natural gas, which environmentalists embraced back in the aughts (2000-2010) as a “bridge fuel” when they thought they could bash coal with gas, and turned on a dime when natural gas became cheap and plentiful. They’ll do the same with electric cars someday.

Besides being the president of Ireland, Michael D. Higgins is a published poet with a reputation among the literati for his facility with language. But that didn't stop him recently from really putting his foot in his mouth.

The occasion was his response to a deadly attack at St. Francis Xavier Catholic Church in Owo, Nigeria, in which 40 Sunday Mass goers were killed and 87 wounded by Islamist militants armed with AK-47s. Higgins issued a statement lamenting the attack, adding that the violation of a place of worship "is a source of particular condemnation." But then his statement took a strange turn. Higgins further condemned "any attempt to scapegoat pastoral peoples who are among the foremost victims of the consequences of climate change." He continued,

The neglect of food security issues in Africa, for so long has brought us to a point of crisis that is now having internal and regional effects based on struggles, ways of life themselves. The solidarity of us all, as peoples of the world, is owed to all those impacted not only by this horrible event, but in the struggle by the most vulnerable, on whom the consequences of climate change have been inflicted.

Higgins' meaning is a little opaque, but the statement seems to imply that rising violence in Africa generally, and this incident in particular, is motivated on some level by "climate change" related food scarcity. That is certainly how it was read by Bishop Jude Ayodeji Arogundade, ordinary of the diocese of Ondo, the Nigerian state in which the attack took place.

Saying that he felt motivated to respond because of the historical ties between Ireland and his own diocese -- its first two bishops were from Ireland and the work of Irish missionaries in Nigeria is legendary—Bishop Arogundade released a statement of his own. “While thanking the Honorable Mr. Higgins," he said, "for joining others to condemn the attack and offering his sympathy to the victims, his reasons for this gruesome massacre are incorrect and far-fetched":

To suggest or make a connection between victims of terror and consequences of climate change is not only misleading but also exactly rubbing salt to the injuries of all who have suffered terrorism in Nigeria. The victims of terrorism are of another category to which nothing can be compared! It is very clear to anyone who has been closely following the events in Nigeria over the past years that the underpinning issues of terror attacks, banditry, and unabated onslaught in Nigeria and in the Sahel Region and climate change have nothing in common.

David Alton, a Liberal member of the British House of Lords and Human Rights campaigner issued an even more stern and condemnatory response to President Higgins, saying,

It is striking how quickly politicians and commentators trot out the same discredited banal narrative that the drivers for such carnage are climate change and lack of resources. They say that the causes are ‘complicated,’ with hardly a mention of the jihadist ideology that is behind the endless atrocities of ISIS and Boko Haram. And then they say that everyone suffers and there is a sort of equivalence with victims coming from varied religious backgrounds. They should tell that to the families whose loved ones are targeted, day in and day out, and see what sort of response they receive.

It is worth noting that President Higgins has subsequently denied that his intention was to link the attack to climate change. If that's the case, though, why did he mention it at all? The likeliest answer is that, as a dedicated but parochial leftist, he knows that acknowledging Islamist violence could get him accused of racism, but in the globalist circles he runs in, there's no wrong time to lament "climate change."